An homage to the aesthetics of victorian engineering:

This working railway viaduct is between Harrogate and Knaresborough, It was visible from my tent on the Yorkshire Showground and during the week in July that I was working at the ‘Great Yorkshire Show’  (as a humble caravan park attendent)and  I fell in love with it. After finishing my shift at 2pm each day i would take my painting gear out and wander the surrounding paths through wood and open field to find the perfect aspect.

Every half an hour or so another train would make the crossing on the way to York or Leeds,as trains have done more than a hundred years. I was fascinated by the way the arches frame the view and accentuate it and how it has become inextricably a part of the natural landscape, as if those Victorian engineers had been landscape  gardeners with an exceptionally long view.  I’m really proud of this little sketch book double page spread for the way it captures this.

I spent the majority of July living out of my tent in Yorkshire, Wales, and Cumbria, waking early to park cars, and then spending my free afternoons sketching. It was quite a gruelling scedule and there were as many rainy days as not, (especially in the Lake District!) but the surroundings were so inspiring it was impossible to be there and not paint and make the most of the time I had, especially the Lakes which were just stunning. I did sketch book study after sketch book study trying to capture this transient and ever changing magical land. I somehow I managed to keep my sketches safe and dry once they were finished and came back with several treasured pieces of which here are a selection. It’s helped  me understand better just what is possible, working on the move and when coming face to face with a  landscape subject that is truly worth writing home about. For me it is a very positive start.

The Grand Tour has begun in modest fashion. 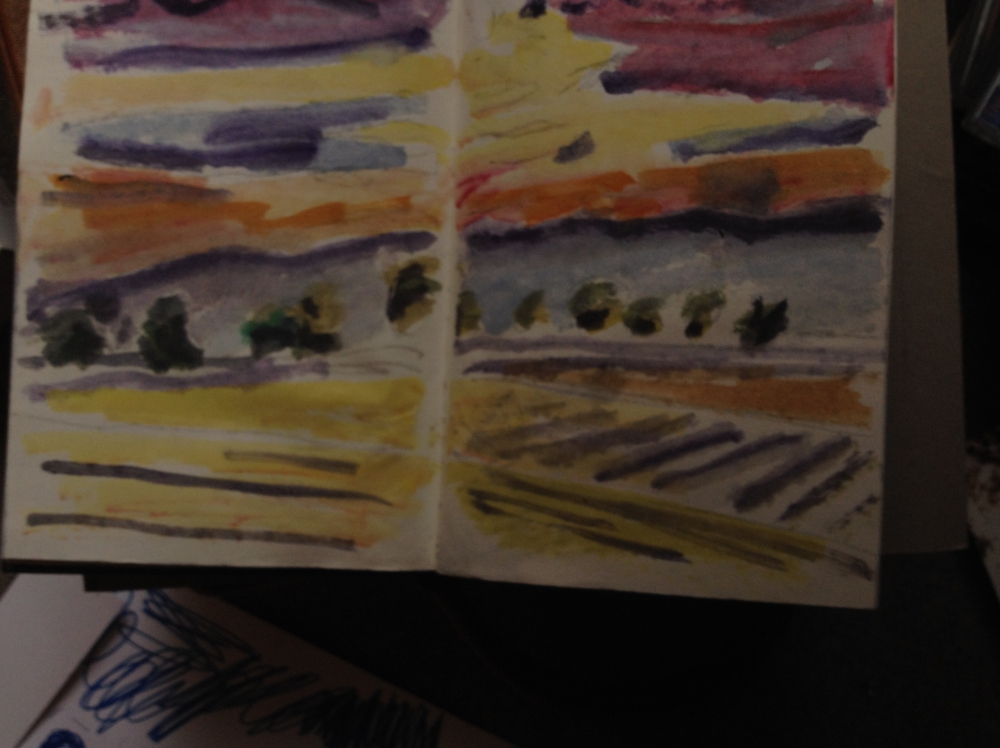 I came to be in Cumbria because I was working at a festival called Kendal Calling in Lowther Deer Park near Penrith. I could hear the beginning  of Franz Ferdinand’s set as i painted this sketchbook piece, and headed in to hear the rest once the rain set in.